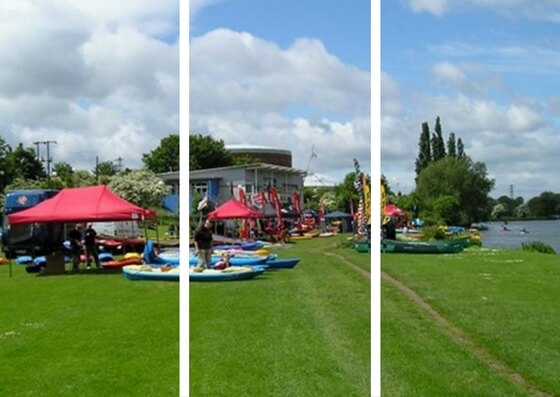 We are a self-funding registered charity situated in Wokingham Berkshire. We provide:

We are passionate about delivering the best possible service and are dedicated to professionalism and excellence. If you want to go paddling in Berkshire, there’s no better place to be.

The Centre was inspired 10 years prior to its opening in 2001by John Cooper, a committed scout. Many people had been accessing the river Thames here at Dreadnought Reach long before Oracle and Thames Valley Park had evolved. There were no facilities for canoeists at that point – indeed the whole stretch was merely scrub land.

John campaigned by visiting Wokingham Borough Council regularly for many years waiting for an opportunity for facilities to be built.

Wokingham Borough Council finally agreed to build a Watersport Centre using 106 funding. The Centre opened to the public in February 2001 and Wokingham Waterside Centre Ltd was set up to run it at no cost to the council or its community.

Donations from Wokingham Scouts, Oracle, Microsoft and Earley Town Council greatly assisted in the purchase of equipment and Wokingham Waterside Centre became a completely self funding registered charity run by volunteers and aiming to benefit the local and wider community.

As the number of people using the Centre grew so did the expectations of the Board of Trustees and in 2005 they made the decision to employ a full time manager and head coach. This enabled the Centre to be open to Schools and other local groups during the day as well as running courses in the evenings and at the weekends.

The Centre continues to go from strength to strength and has Canoe England Top Centre, Paddle-ability Top Centre and Club Mark status.

John created a lasting legacy to the community.

John Cooper – Founder of Wokingham Waterside Centre LTD – was awarded The Reading Evening Post award for Service to Sport and the Community (Individual) in 2001.  The award was presented by Cllr Tony Barber, the mayor of Wokingham.  “This is a great achievement for John and justifies the perseverance and bloody minded tenacity of someone who had the dream of the Centre so many years ago.”

About the River Thames

It’s part of the longest river in England, it has 45 locks, is home to over 25 species of fish, boasts three areas of outstanding natural beauty and it’s the only river in Europe to have a national trail follow its entire length. This is the rural River Thames.

Starting as a small trickle in the Cotswolds the River Thames travels over 210 miles through the heart of some of England’s most picturesque towns, right into the centre of London and eventually, out into the North Sea. Whether you’re a holiday-maker, a fisherman, boater or just in search of something to do at the weekend, you will find everything you need on the banks of the River Thames.

Facts about the River Thames: